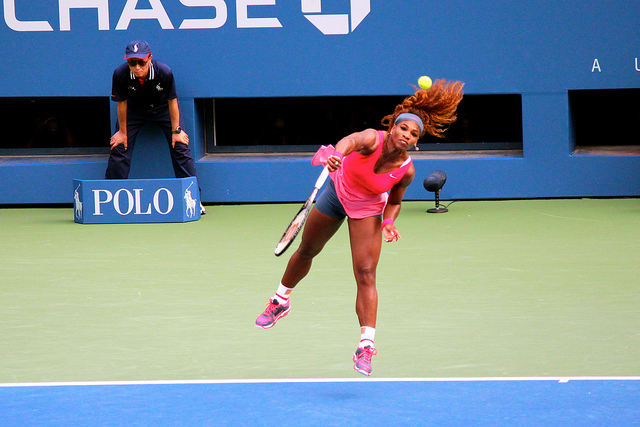 Like a fine wine, Serena Williams’ tennis game gets better with age. Williams started her professional career in September 1995; since then, she had been a dominant force, racking up Grand Slams, titles, and records. On Wednesday, she tied one of Margaret Court’s records for number of wins at the Australian Open. When Williams beat Vesna Dolonc 6-1, 6-2, she earned her 6oth win at the Open. On Friday, she surpassed that, gaining win number 61 against Daniela Hantuchova.

Taking only an hour and twenty minutes, Williams walked away with a 6-3, 6-3 victory. The next record she can shatter? Lindsay Davenport’s record of 69 main-draw Australian Open matches in the open era.

To top that, all Williams needs to do is show up to her match on Sunday against Ana Ivanovic. It is hard to imagine Williams not being present. She has easily won her previous rounds, despite the scorching temperatures in Melbourne — 102 degrees Fahrenheit during her match with Hantuchova.

Wherever Serena goes, she bring what Sports Illustrated‘s Jon Wertheim describes as her “aura,” that magnetic energy some players inspire after years on the court, building an impressive record. “Her entourage — her agent, her coach, her trainer, her hitting partners — are better known and better recognized than most players in the draw,” Wertheim writes. “When she walks the halls, guards look up, hoping their eye contact is reciprocated. Her name is the first line on the draw.”

The description won’t appear over the top to anyone who has seen Williams play in recent years. Last year she won eleven titles, and 78 of her 82 matches. The year also added two more Grand Slam titles to her name — the U.S. Open and the French Open. It would have been an outstanding year for any tennis player, but another factor about Williams cannot be ignored — her age. At 32 years old, Williams is a veteran of the tennis world who has been eligible for retirement for years.

She has acknowledged this herself. ”I feel like, in life 32 is young. In sports it’s old,” ESPN reports Williams said. “But for whatever reason, I feel like I just never was really able to reach my full potential, and I feel like recently I just have been able to do a little better. I just keep trying to improve on everything.” With that mentality, it isn’t shocking that Williams has her eyes on the prize, and another record. If she manages to win it all in Australia for the sixth time, she will have tied Chris Evert and Martina Navratilova’s record of 18 Grand Slam titles.