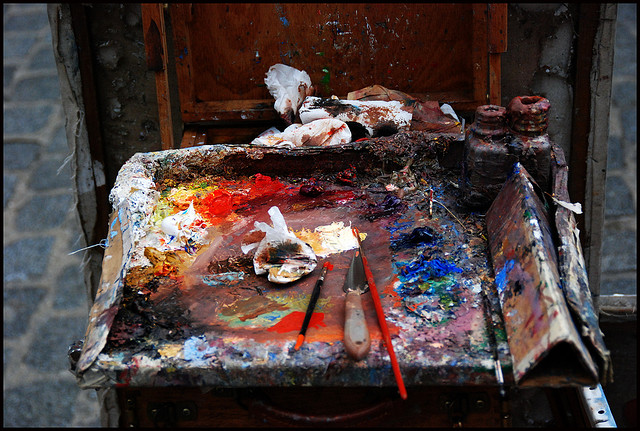 As the road to Brazil comes to a long and winding end, the hype machine continues to churn out all kinds of excitement. That’s not a bad thing, since that usually results in some very creative people getting paid to craft awesome things that sustain our interest while we hang around waiting for June, and the international teams, to land in Brazil. ESPN is very good about this, and they contracted artist Cristiano Siqueira, a Brazilian who goes by the alias of CrisVector, to create posters celebrating each of the thirty-two teams that will be competing in the World Cup.

Siqueria, who has worked for Nike, the Wall Street Journal, Playboy, and Inked, according to his website/portfolio (which you can, and should, check out here), more than delivered — bringing his distinctly sharp realism, which has shades of comic art, to each of the teams. The structure of the pieces is roughly the same throughout: You get a variation on the flag, the team’s best player, and a noun-as-description of the team (so the USMNT, for example, is branded “Yanks”). Boiling it down to that level misses the point, though, since it’s the nuance and the differences between the works that make the whole collection pop.

Which Group got the best treatment overall, though? That’s right, Capital G Group. The organizational pooling of all the teams which determine the starting rounds of the World Cup. In case you need a refresher on which nation is in which group, you can check out FIFA’s site here. Then read on to find out which teams are getting the most style points from Siqueria. 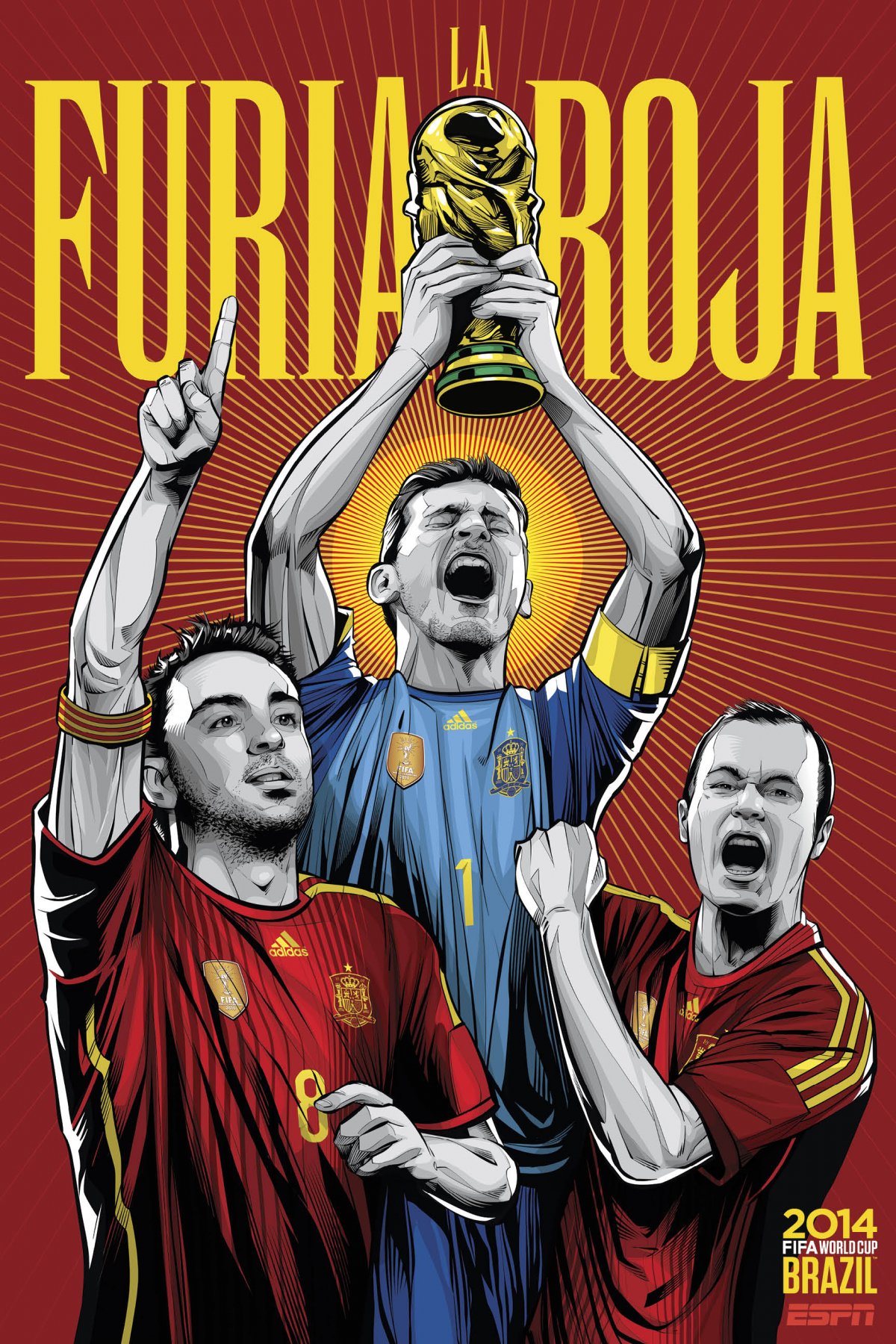 Poor Australia. Stuck in the middle of a very, very rough group B, they’re the only team that isn’t disturbingly good on this list. Spain is one of the favorites for the tournament after coming off of a 2010 World Cup Victory (that’s why they’ve got the trophy in the poster) as well as a pair of European Championships. The roster — which is made up largely of EPL players from Real Madrid and Barcelona, two clubs that even those of us who aren’t soccer fans might recognize — is nothing to be trifled with. Neither is the team’s poster, which depicts a positively Christ-like Sergio Ramos clutching the trophy.

In case your Spanish isn’t what it used to be (or never was at all), La Furia Roja translates to The Red Fury, one of the club’s several nicknames, which all have variations on that theme: The Red, The Fury, Spainish Fury, etc. As for the Australian club, yes, they are actually nicknamed ‘The Socceroos.’ For the completist: the Netherlands players are called either ‘The Dutch Eleven’ or ‘The Orange,’ while the Chilean squad is also ‘The Red.’ Which could be confusing, if it wasn’t so blindingly obvious which team was which during the matches. 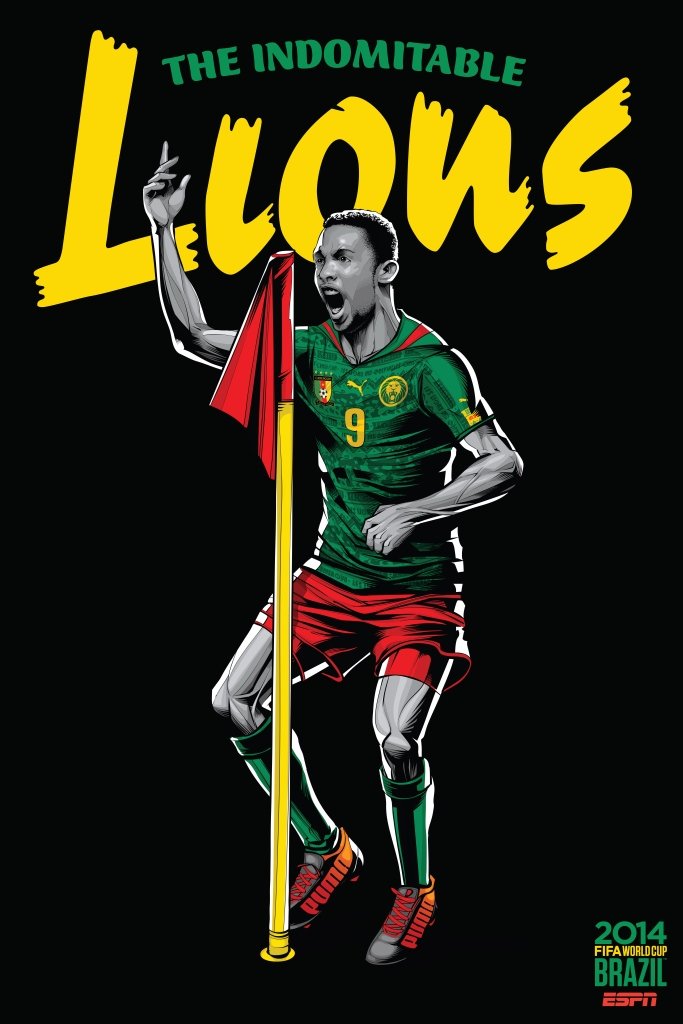 Maybe it’s the stark black background that makes Cameroon’s poster stand out so much. The country behind the first African team to reach the quarter finals, the Indomitable Lions get the red, green, and yellow aesthetic from their nation’s flag. Since 1990, the team has yet to make it out of the group stage, and its hope is almost entirely pinned on that guy in the poster — Samuel Eto’o, the squad’s all-time leading scorer, a striker who last played for Chelsea. 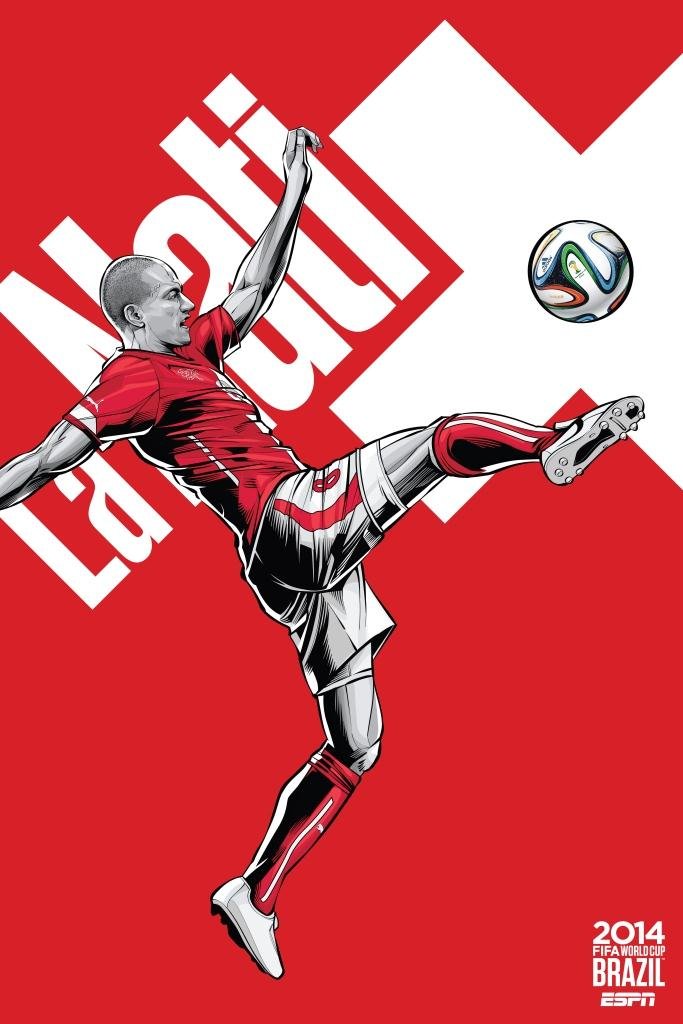 Switzerland, who have the relatively uninspired team nickname of ‘La Nati,’ or ‘the national,’ is the head of what might be the weakest group in the entire tournament, Group E. Despite being the seeded team in the group, the Swiss squad don’t hold a commanding lead in the talent or skill department over their competition. Blame the relatively Byzantine seeding system that FIFA uses. Switzerland is also the only team that has ever lost in the World Cup without allowing a goal, ’cause penalty kicks are straight heartless. Bonus points if you already knew who the excellently named Xherdan Shaqiri was before you opened this article. He’s pretty awesome. 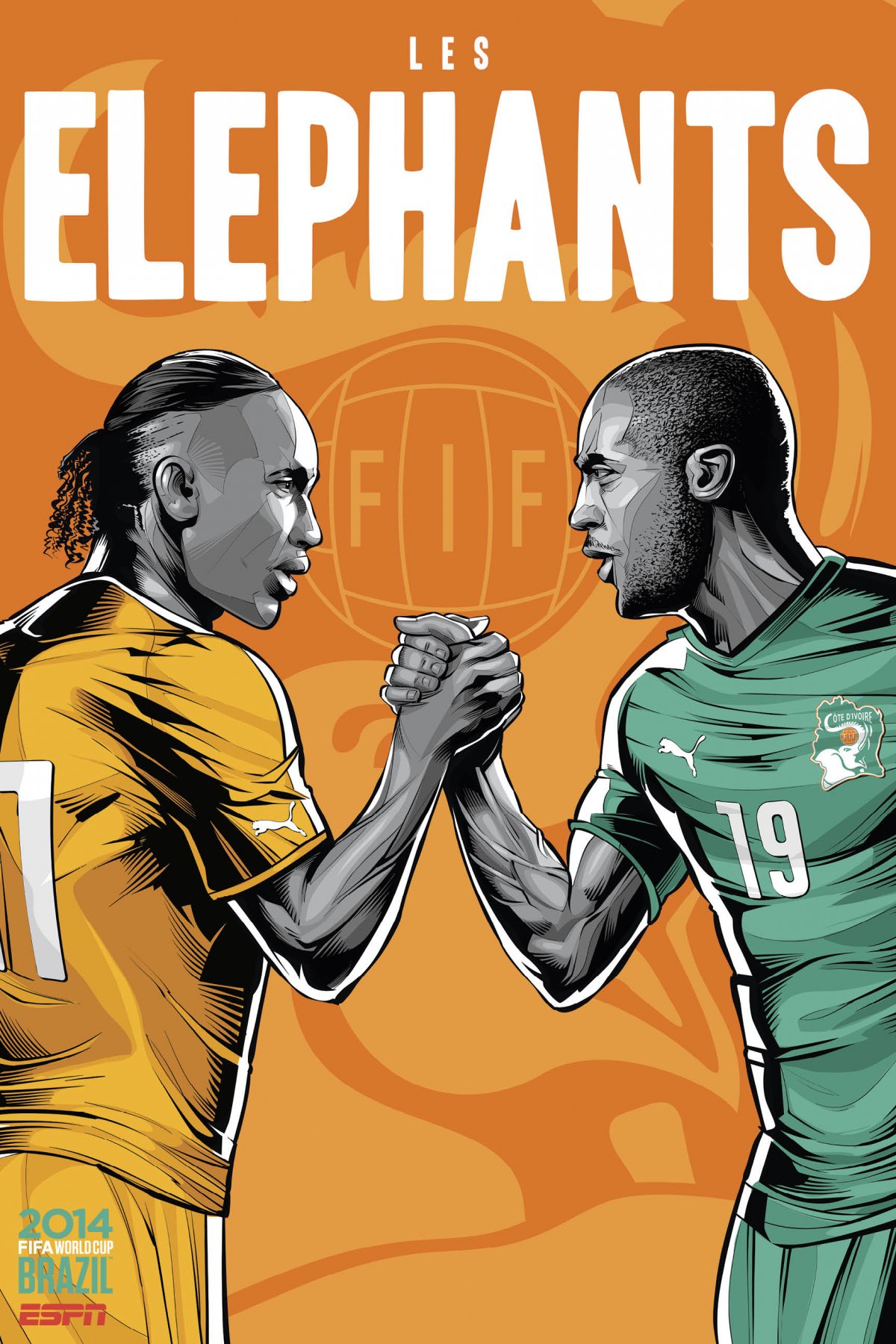 Almost more famous for its inability to go as far as its talent suggests it should, the Ivory Coast national football team has qualified for the World Cup exactly three times since 1930, failing to get beyond the group stage in 2006 and 2010. This year, with the imminent retirement of Didier Drogba — think of him as their Landon Donovan, who should also be en route to Brazil — it’s imperative that the team make the most of its inclusion in Group C: a collection of teams it has a great chance of beating.

For more information on the Groups, check out FIFA’s breakdown here. The World Cup starts June 12. It’s going to be awesome.