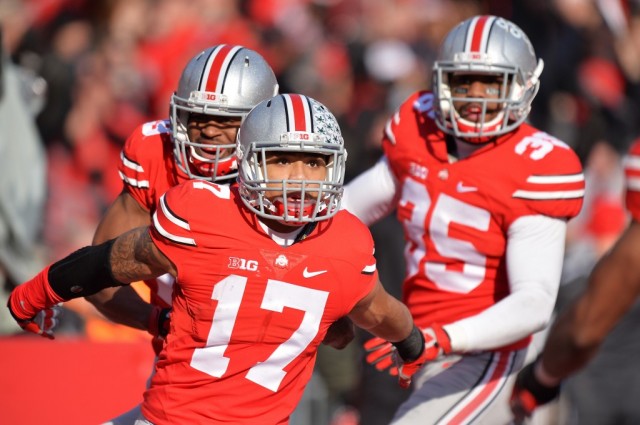 While much of the talk about college football’s postseason has centered on the inaugural four-team playoff bracket, there’s an important step between here and there that’s been comparatively overlooked: Winning the league title. We’ve thrown around so many national championship scenarios in the past month (since the College Football Playoff (CFP) selection committee released its first rankings) that we’ve barely paid attention to the conference championship scenarios, which may have real ramifications for the former on Selection Sunday. So, it’s time to catch up.

Since the CFP has (sadly) drawn a clear line in the sand between the five so-called power conferences and the other leagues, or between the “haves” and the “have-nots” (how else can we explain undefeated Marshall not even cracking the Top 25?), here is a quick primer on how each of the power leagues’ championships (the ones that the CFP leaders think really matter) will be decided over the next two weekends.

The ACC Championship Game is set. On Saturday night, December 6 in Charlotte, N.C., Florida State and Georgia Tech will face off for the ACC crown. The Yellow Jackets clinched the Coastal Division with a 6-2 league record after Duke lost to North Carolina Thursday night, and Florida State went a perfect 8-0 in the Atlantic Division to earn their third straight trip to the conference title game. The undefeated ‘Noles haven’t lost to an ACC team since October 2012, a streak that includes a 21-15 win over the Ramblin’ Wreck in the 2012 ACC Championship Game.

In the Big Ten, the Ohio State Buckeyes (pictured) have sewn up at least a share of the first-ever Big Ten East championship. At 7-0 in B1G play (and with a tiebreaker over second-place Michigan State), Urban Meyer’s ball club is assured a trip to Indianapolis on Saturday, December 6 to play for the league title. The Bucks’ opponent will be either Wisconsin or Minnesota. The Badgers currently lead the upstart Gophers by a game in the Big Ten West standings, but the two teams will play in Madison this Saturday afternoon. The winner will be headed to Indy. 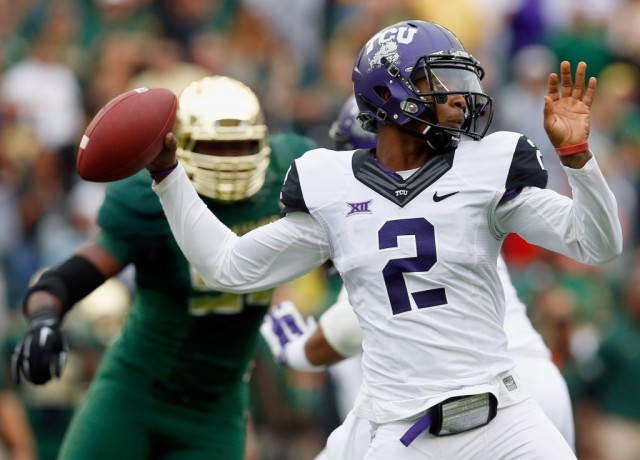 The Big 12 is the only one of five power conferences that doesn’t have a championship game, and not-so-coincidentally, also has the muddiest title scenario as the season’s final weekends approach. Baylor, Kansas State, and TCU are all tied at 6-1 with two games to play. The Bears take on Texas Tech at Jerry Jones’ AT&T Stadium, then host Kansas State in the regular-season finale. KSU entertains Kansas this weekend before traveling to Waco. TCU (pictured) will head to Texas on Thanksgiving night and then finish the season at home against Iowa State. With all three teams currently tied, each of those games loom large, but perhaps none bigger than Kansas State at Baylor on December 6.

The situation in the Pac-12 is relatively simple. Oregon has a three-game lead in the Pac-12 North with one game to play, so the Ducks are going to be participating in the conference championship game at brand-new Levi’s Stadium in Santa Clara on Friday night, December 5. Their opponent, the South representative, could be the UCLA Bruins, if UCLA takes care of business vs. Stanford Friday night. Otherwise, this week’s Arizona State–Arizona victor will be the sole winner of the Pac-12 South and earn a date with Oregon.

Alabama, the No. 1 team in the country, will win the SEC West with an Iron Bowl victory over Auburn. The only other team that has a chance to represent that division in the SEC Championship Game on December 6 in Atlanta instead is Mississippi State. The Bulldogs share Alabama’s 6-1 conference record, but Nick Saban’s team has the tiebreaker, so Mississippi State’s only path to the Georgia Dome is a win over Ole Miss in the Egg Bowl and an Alabama loss to Auburn. As for the SEC East, Missouri is in the driver’s seat and can claim the division title outright with a win over Arkansas Friday. (Easier said than done after the Razorbacks shut out LSU and Ole Miss in back-to-back weeks). Should the Tigers slip up, Georgia would take the East Division and face the Crimson Tide for SEC honors.