When Charlotte’s Josh McRoberts hit LeBron James with a hard foul at the end of the second game of the series with Miami, it appeared to be a clear case for a flagrant-2 and ejection. However, referees called McRoberts for a common foul and left him in the game, which Miami proceeded to win 101-97. McRoberts was fined $20,000 by the NBA Friday for the non-basketball play, but the bigger harm may be the assurance Miami will win the series if James’s history of responding is any case study.

Whether it’s been mockery in the press, hard fouls on the court, or an accidental shot that breaks his nose, LeBron James has endured a great deal of abuse in the years following his departure from Cleveland. Critics say he invited the scrutiny with his handling of the Miami signing, but the action on the court isn’t open to as much interpretation. When McRoberts fouled James, there appeared to be no play on the ball. Previous attacks on the body or psyche of LeBron have turned out to be terrible strategy for opponents.

Before Lance Stephenson became a candidate for the NBA’s Most Improved Player or got mentioned by the press for any reason, he was that guy that made the choke sign in Lebron James’ direction one fateful day in Indiana. The Pacers has been on a roll up to that moment in the 2012 Eastern Conference seminfinals. By blowing out the Heat on their home court, Indiana enjoyed a 2-1 series advantage. Yet Stephenson’s mocking gesture directed toward LeBron James unleashed a beast within the Miami star. 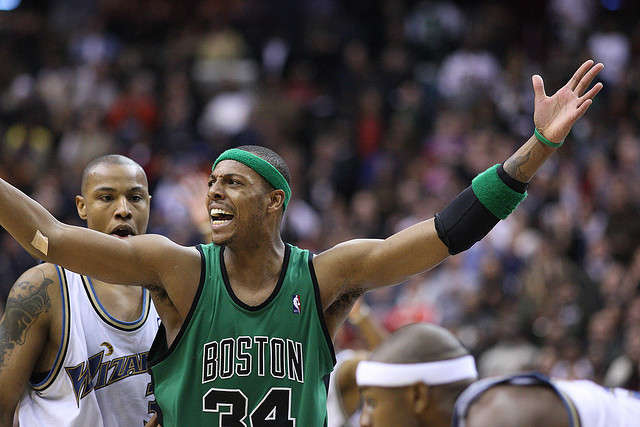 The next game, James scored 40 points with 18 rebounds and 9 assists. In Game 5, James doubled down with 30 points, 8 rebounds, and 10 assists as Miami dominated the Pacers. The Heat closed Indiana out in Game 6. As a reminder of why Stephenson’s move was so ill-advised, Miami reserve Dexter Pittman made a point of landing an elbow to Stephenson’s neck during garbage time in Game 5. Following the choke gesture directed at James, Miami never lost a game while LeBron got his mojo firing on all cylinders. In other words, it was terrible playoff strategy.

In 2012, the Boston Celtics were still title contenders and LeBron had experienced the ugly Finals loss to the Mavericks in 2011. This prologue set the stage for the 2012 Eastern Conference Finals between Celtics and Heat. Miami threw away a 2-0 advantage by losing three straight to the Celtics before Game 6 in Boston. At that point, the anger and mockery of LeBron James had reached a fever pitch.

James responded as only a player of his caliber could, scoring 45 points with 15 rebounds and 5 assists in Game 6 to lead the rout of the Celtics in their building. Then he closed the door on Boston’s “Big Three” era with a Game 7 win that sent Miami to the NBA Finals. James’ domination of Paul Pierce and the rest of the Celtics team seemed to be a measured response to the taunting Pierce and others had sent his way over the years (at one point, Pierce openly mocked James on Twitter.) Physical abuse also has not quieted James by any measure.

In a February game thast was billed as a matchup between the favorite to win NBA MVP (Kevin Durant) and the incumbent, LeBron James came out on fire, scoring Miami’s first 12 points in four minutes on 5-5 from the field. Durant seemed stunned, but James kept his foot on the pedal until Serge Ibaka broke his nose in the fourth quarter. By then, Miami’s rout of the Thunder in OKC was complete. LeBron ended up with 33 points on 15-of-22 shooting.

One could argue that LeBron’s pride was dinged when he took to the court in Oklahoma City that February night, but he made one of the boldest statements of the year. That is, until he returned from the broken nose injury March 3 and scored 61 points against the Bobcats on 22-of-33 shooting.

Whether the abuse directed James’s way be physical or psychological, he has proven capable of responding in resounding fashion. It’s reasonable to call it LeBron 2.0 or LeBron post-Decision, but in either interpretation he’s an unstoppable, unflappable force when opponents take the floor against Miami. The only way to make it worse is to make him angry.