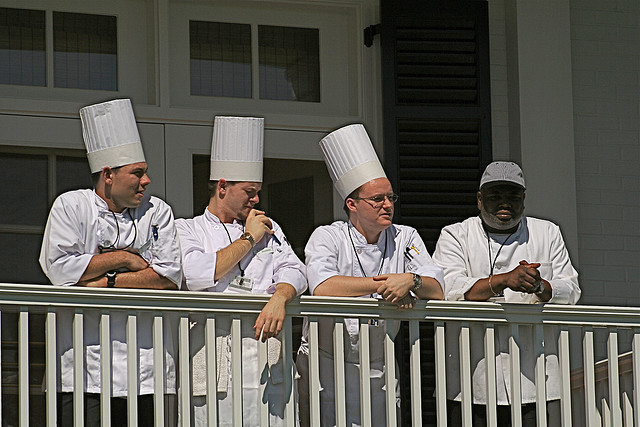 Professional golfer and reigning Masters Champion Adam Scott served bugs at his Champions Dinner. “I thought it would be nice to have something really local to serve,” Scott, an Australian, explained.

The Moreton Bay bugs are no joke either. “They are legitimate bugs, the real deal,” Scott said. “I’m not going to serve anything second-rate tonight.”

The dinner is a Masters tradition that dates back to 1952. That year, Ben Hogan penned a letter Club Co-Founder Clifford Roberts expressing his “wish to invite all Masters Champions who are going to be here, plus Bob Jones and Cliff Roberts,” to a dinner held on April 4 at 7:15 p.m. Hogan’s “only stipulation” was that everyone wear their green jackets. Ever since, it has been one of the many traditions of the Masters.

Moreton Bay bugs are also known as Bay lobster. The Sydney Fish Market describes the crustaceans as having reddish brown shells, short narrow tails, and flat heads. Active at night, they spend their days burrowing into sand or mud. Bay lobster pairs well with citrus flavors and green vegetables; they are also one of Scott’s favorite foods.

The winner from the previous year always chooses the menu, and only fellow champions are allowed to attend. The tournament explained in a press release for Phil Mickelson’s dinner in 2011 that how champions over the years have approached the meal has differed depending on their preferences. Some, like Sandy Lyle choose to highlight their heritage. The Scottish golfer famously served haggis to his peers. Having sheep innards on the menu was a first, Charles Coody stated.

“I had a steak that night after I found out what haggis was,” Coody said. ”Sandy was the first to really do something like that. Before that, it was always steak, fish, or chicken on the menu, and you ordered from that.” To his credit, Lyle realizes his meal has not been the most popular of the recent dinners.

“The food has been very interesting,” Lyle said. “I think Vijay (Singh) wins the order of merit on that, though. He brought in Thai food and served it in 15 different courses. I got the low round with my haggis.”

Angel Cabrera stayed true to his home country of Argentina with empanadas, grilled meats — including blood sausage — and for dessert, crepes with dulce de leche. In 2011 though, Mickelson did not wish to shed a spotlight on San Diego, and took his fellow winners to Spain instead. He wanted to let Steve Ballesteros know the golfing world was thinking of him. Ballesteros was the first European to win the Masters in 1980 and was one of Mickelson’s idols growing up. At the time, Ballesteros was undergoing treatments for a brain tumor and was unable to attend.

“He was the classiest gentleman to me,” Mickelson said. “Here is a guy I looked up to as a kid, loved the way he played and was drawn in by his charisma, and he didn’t let me down at all.” That night, a green salad with sherry vinaigrette was followed by a seafood paella. Prime beef tenderloin with Manchego cheese and smoked paprika demi-glace finished the main course, and a Spanish apple pie was the dessert.

But not all the dinners are so serious. In 1998, a 22-year old Tiger Woods gave a dinner complete with cheeseburgers, grilled chicken sandwiches, french fries, and milkshakes. There is an element of that playfulness with Scott’s dinner as well. In his press conference, the Aussie said the chefs had a tall order for the dinner, matching mom’s pavlova. “We’ll see how the chefs do with Mum’s Pav,” Scott laughingly stated. “This is going to be maybe a little trickier for them. Hopefully they get it right.”

The mood of the dinner is relaxed, causing Cliff Roberts to say: “Over the years, no one has been immune to the banter.” Like the entire tournament, the dinner is a tradition unlike any other. It is one that Augusta enthusiasts look forward to learning more about with each passing year, but only begins to whet their Masters-related appetites. So as past champions take in the taste of crustaceans, here are a few other Masters facts to chew on: