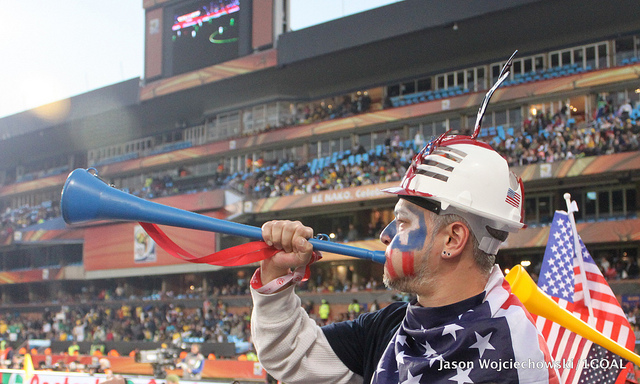 When it comes to national sports, soccer is a charitable fourth, as far as its popularity in the United States is concerned. Definitely behind football, definitely behind baseball, probably behind basketball, and probably ahead of hockey. When the World Cup isn’t around the corner, interest in soccer vanishes faster than the interest in frosted tips. Luckily for fans, though, the World Cup is right around the corner, so we can all collectively grab our vuvuzelas, pretend that we’ve got any semblance of a national fight song, and watch the games with the vain hope that our fellow countrymen and women might finally ‘get it’ when it comes to soccer.

Hey, it’s a dream, OK? And while part of the reason soccer’s failed to catch on surely has to do with the fact that we’re not a dominant force (if there was a soccer equivalent to the 1992 USA Men’s Basketball squad, aka The Dream Team, we might see it differently), that’s not an insurmountable hurdle. Our country can get better and our teams can play better, even if we’re supporting a team that throws its legacy players to the curb.

And it’s not like our World Cup teams are completely devoid of talent — we may not be the most heralded international team, the fifth most heralded international team, or even the tenth, but we’re not all the way at the end. We’re still in the conversation with the middle of the barrel, as it were. To that end, and to get everyone stoked on the World Cup (even if the U.S. is slated to get roundly trounced in their group). 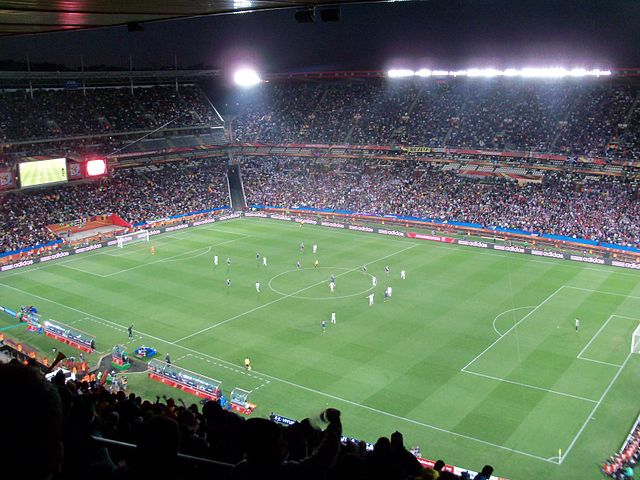 That’s right, one of the most important matches in U.S. history took place over fifty years ago, in Brazil, when the United States bested England in a 1-0 victory that shocked everyone. Seriously. This match, which was supposed to be such a one-sided affair that the U.S. coach proclaimed his team sheep ready for slaughter before the match, was later turned into a 2005 film titled The Game of Their Lives. We’ve included the trailer below, but the story is one of those too true to be fabricated tales: The underdog defeats the favorite in a tightly contested match.

Here’s a fun fact: The American team found an unexpected swell of support coming from the locals — who had figured out that if the U.S. beat England, then Brazil wouldn’t play England (who were basically the earlier version of the USSR Hockey Team) in the final. “A couple hundred Americans had come from a Navy or Air Force base, so we knew they were there,” Walter Bahr, a member of the team, told ESPNFC, “The overwhelming majority was Brazilians, but they rooted for us the entire time. We didn’t realize why until after.”

4. The 1994 World Cup team convinces the world to take them seriously

If you think that soccer is an oft-maligned sport now, that’s nothing compared to the scene from twenty years ago. When the U.S. was awarded the hosting duties for the ’94 World Cup, the announcement was met with disdain. Because, you know, North America was about the furthest thing from a soccer hub as can be, and one of the perks that the host country enjoys is automatic entry into the Tournament. It’s worth noting that the 1994 tournament actually predated the MLS, so there was considerable perceived truth to the complaints.

But then the U.S. beat Columbia in the first round (a shocker), and “for the first time in U.S. history, I saw a stadium full of American flags,” Fernando Clavijo, a member of the American team, said to ESPNFC in 2010. “The stadium before was always full of foreign flags. But that day, there were people waiting for us with American flags. It was the experience of a lifetime.”

Full disclosure: This moment was actually voted as the best moment in this last 100 years of US Soccer, narrowly edging out Donovan’s goal against Algeria (which you can see below). So why the swap? After all, Wambach’s goal was the latest in World Cup History (at the time, it’s since been beaten), and it directly lead to the penalty shootout that would win the quarterfinal game for the American team. We’ve got to give Donovan the nod, though,  because a game winner at 90 minutes is better than a tying shot at 122.

After all, had the Women’s team lost, this goal would be regulated to that strange purgatory of ‘valiant efforts’ the same way we remember great players that can never quite put it together in every sport. Donovan’s shot won the game for the team, while Wambach’s header put the team in a position to do so. They’re both great goals, though, and it’s important to remember that they’re not canceling each other out in terms of fantastic awesomeness.

And how did the two teams fair? the 2011 squad fell to Japan in the Final, while the 2010 team was knocked out in the Round of 16 by Ghana. That’s why these are are the greatest moments, rather than a ranking of the best U.S. teams to win World Cups.

Of course, this has to be at the top of any of these lists. When the 1999 women’s team took China to a scoreless tie, even after extra time, it was hosting the largest crowd a women’s sporting event has ever seen. More than any other team, the ’99 squad arguably did more for the good of soccer than any of the also-ran teams we’ve birthed before or since. And, in a nice bit of Lombardi-esque spectacle, the team is recognized as just that — a collection, or a collective, rather than a player and a supporting cast. Brandi Chastain got a lion’s share of the attention for tearing her shirt off, for sure, but the entire team was credited as the Sportsperson (people?) of the year.

And there you have it. The five greatest moments in U.S. World Cup history so far. Perhaps we’ll see an addition to this list when the 2014 WC starts up? Fingers crossed.