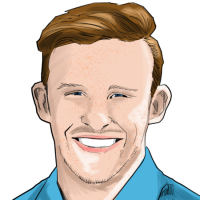 David Wysong began his sportswriting career in 2013 while still in high school and joined Sportscasting in 2020, where he channels his die-hard passion for the NFL (Indianapolis Colts), NBA (Cleveland Cavaliers), college football (Ohio State), and MLB (Cincinnati Reds) into covering the NFL, NBA, and LeBron James.

David’s inspiration comes from pursuing his childhood dream to write about sports. He served as the Editor-in-Chief of The News Record, the student newspaper at the University of Cincinnati, where he graduated with a bachelor’s degree in journalism, a double minor in electronic media and sports management, and the University of Cincinnati service to journalism award. David was a Society of Professional Journalists Region 4 Mark of Excellence finalist for in-depth reporting at The News Record and an Ohio Associated Press Media Editors Division I Best Sports Writer finalist at the Chillicothe Gazette.

David’s work has appeared in The Athletic, Scarlet and Game (FanSided Network), FanSided, the Cincinnati Enquirer, the Cleveland Plain Dealer, TriStateFootball.com, and PlayMichigan.com. You can read more of his work on Muck Rack. He enjoys reading the work of Bob Ryan, Dave McMenamin, Jackie MacMullan.

Jordan Poyer Makes Bold Declaration About Josh Allen That Patrick Mahomes, Aaron Rodgers May Have Something to Say About

Cincinnati Bengals: Joe Mixon’s Recent Quote Shows How Much the Vibe Has Shifted in Cincy

Darius Garland’s Massive Extension Can Help Him Become the No. 1 Point Guard in Cavs History

What Is ‘NBA All-World’?

Draymond Green Pleads for Adam Silver to Let Him Cuss Back at Fans: ‘Don’t Hit My Pocketbook’

LA Clippers: Signing John Wall Will Either Be a Disaster or 1 of the Best Decisions in Team History

Why Did Kyrie Irving Leave LeBron James and the Cleveland Cavaliers? Looking Back at Their 2017 Breakup

What Is Tight End University?

Matt Ryan Has Peyton Manning’s Stamp of Approval in Indy: ‘I Thought It Would Be Really Good for the Colts’

NBA Draft: How Many Rounds and Picks Does It Have?

NBA Draft: How Many No. 1 Overall Picks Have Come out of Duke?

NBA Draft: Looking at Every No. 1 Pick in Orlando Magic History

Cleveland Cavaliers: 4 Players the Cavs Should Consider Selecting in the 2022 NBA Draft

Grant Hill Says He Maybe Could Have Joined Kobe Bryant on the Lakers, but He Chose to Ignore Phil Jackson’s Calls