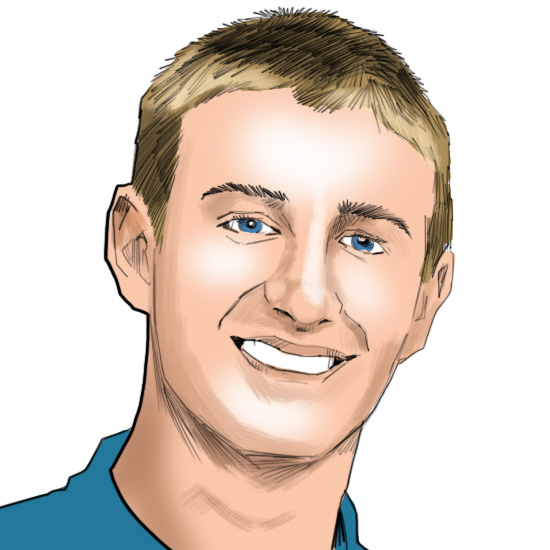 Jack Dougherty spent six years as a sportswriter with publications such as GoPSUSports.com and the Associated Press before joining Sportscasting in 2020. He covers the NBA, NFL, and golf for Sportscasting with expertise on his hometown teams such as the Philadelphia Eagles, 76ers, and Phillies. When he’s not writing about sports, he’s watching them or playing them as he regularly heads to the gym to play basketball or the golf course to play a round.

Jack received the John Curley Center for Sports Journalism certificate at Penn State University, won the 2017 Society of Professional Journalists Mark of Excellence Award for Boys of Summer, and draws inspiration from sportswriters such as Tom Verducci, Bill Simmons, and Jackie MacMullan.

Noah Gragson and JR Motorsports Can Breathe a Sigh of Relief After Winning Their $100,000 Battle Against NASCAR

When Was the Last Time the New York Knicks Made the Playoffs?

Tom Brady and LeBron James Crack Forbes’ List of the 10 Highest-Paid Athletes for 2021, but Neither Took the Top Spot

Dwyane Wade’s Biggest Financial Regret From His NBA Career Cost Him Millions: ‘I Would Be A Lot Richer Today’

Kyle Busch Rips NASCAR for Insensitive Twitter Post After His Third-Place Finish at Darlington: ‘U Guys R So Stupid’

Bryson DeChambeau Turned a Potentially Disastrous Blunder Into a $228,000 Payday at the Wells Fargo Championship

Rory McIlroy Met His Wife, Erica Stoll, Thanks to the Most Embarrassing Moment of His Golf Career

Patrick Reed Sends a Stern Message to Everyone Who Thinks He’s a Cheater: ‘That’s so Far From the Truth’

Tom Brady Will Have His Vodka Martinis Shaken, Not Stirred in New $6 Million James Bond-Style Yacht

The Jacksonville Jaguars Stole the Crowned Jewel of the NFL Draft, but Urban Meyer Suffered His First NFL Heartbreak in the Process

NASCAR Angers Fans With a Drastic, Confusing Change to a Time-Honored Tradition

Trevor Lawrence’s Annoying Golf Habit Makes Him a Brutal Playing Partner on the Course: ‘It Takes 45 Minutes to Finish One Hole’

Mel Kiper Jr. Was Once Ripped On Live TV by an Angry GM in Epic NFL Draft Moment: ‘Mel Kiper Has No More Credentials Than My Neighbor, and My Neighbor’s a Postman!’

Mel Kiper Jr. Eats the Same Decadent Dessert for Breakfast Every Morning and Devours Pizza in the Most Bizarre Way Imaginable

PGA Tour Rookie Will Zalatoris Continues His Epic Year With a Life-Changing Announcement: ‘Best Day of My Life’

ESPN’s Todd McShay Has Already Made an Enemy Out of a Top 2021 NFL Draft Prospect: ‘He Can Kiss My A**’