The Boston Celtics haven’t endured any type of controversy or encountered any frustration through the first third of the 2022-23 NBA season. Celtics star Jayson Tatum hopes it stays that way.

Tatum and the Celtics suffered their second straight loss Monday and are right back in action Tuesday against the Los Angeles Lakers. Despite the consecutive losses, the Celtics still maintain the league’s record at 21-7. Tatum says the key to his team’s success is to get back to having fun, and he’s hoping it begins against the Lakers in the final game of a six-game road trip.

The Celtics got off to a tremendous start to their six-game road trip, winning their first three. The biggest victory came against the Phoenix Suns, a 125-98 win on Wednesday. At the time, the Suns had the best record in the Western Conference, and the Celtics made a statement.

Since then, it’s been tough.

In a rematch of the 2022 NBA Finals, the Celtics took on the Golden State Warriors, who rode Stephen Curry and Klay Thompson to a convincing 123-107 victory. The Warriors duo combined for 66 points, while Tatum struggled with 18 points on 6-for-21 shooting.

Two days later, things didn’t go any better for the Celtics when they went to LA to face the Clippers. They dropped their second straight game as the Clippers rolled, 113-93.

Boston gets right back into the swing of things tonight when the Celtics face the Lakers, their longtime rival.

Tatum said the Celtics need to get back to the basics 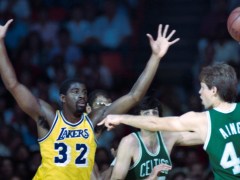 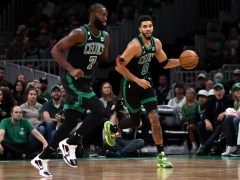 After Monday’s loss to the Clippers, Tatum said the Celtics need to go back to having fun. Although it’s far from adversity, it’s the first time the Celtics have suffered consecutive losses when they’ve been blown out. The only other time Boston lost two in a row this year was back in October when they lost against the Chicago Bulls and then fell in overtime to the Cleveland Cavaliers.

Tatum said the Celtics need to start having fun again.

“We’re not perfect, and we’re not going to be perfect. I think we want to be perfect so bad. We’ve been playing so well this season that when we haven’t — these last two games — it’s felt a little bit worse.”

Tatum said he and his teammates haven’t taken the losses well.

“When we lose, we’re not brushing it off,” Tatum said. “Everyone in the locker room is mad because we feel like we should win every game we play.

“We gotta get back to having fun. It wasn’t fun at Golden State, and it wasn’t fun tonight. We’re going to lose some games. We just gotta have fun. This is basketball. We get paid a lot of money, and we shouldn’t be that tense.

“This isn’t the Finals. It’s not the playoffs. It’s December 12th. This s*** won’t matter in four months. We need to have fun along the way.”