The Los Angeles Lakers had just defeated the Boston Celtics in six games in the 1987 NBA Finals. Head coach Pat Riley and the players were busy partying during the city parade to celebrate the championship. Lakers forward James Worthy remembered hearing Riley’s speech and recalls being stunned.

During a recent appearance on the Knuckleheads podcast, Worthy thought back at that moment. He said he couldn’t believe what came out of Riley’s mouth but then admitted the coach knew exactly what he was doing.

The Celtics put together one of the best campaigns in NBA history during the 1985-86 season, winning 67 games and losing just once at home. The Lakers were upset by the Houston Rockets in the Western Conference Finals and didn’t get a chance to defend their 1985 championship.

The Lakers faced the Celtics in the 1987 Finals, the third championship matchup between the two franchises in the decade. The Celtics were ready for a repeat, getting the oft-injured Bill Walton back after he was limited to 10 regular-season games due to injury.

Game 4 was the turning point in the series.

The Lakers easily claimed the first two games in LA, winning both by double digits. After Boston cut its series deficit to 2-1 with a 109-103 victory at the Boston Garden in Game 3, the Celtics looked to even the series in Game 4 at home.

The Celtics appeared to be well on their way to doing so. Boston held a 16-point lead in the third quarter and led 103-95 late before turning the ball over three straight times. The Lakers scored the next nine points of the game. LA sealed the 107-106 victory when Magic Johnson hit his “junior, junior, junior skyhook.”

The Lakers went on to win the series in six games. 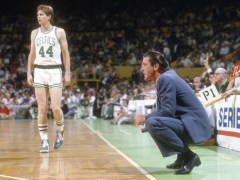 The Los Angeles Lakers Never Trusted the Boston Celtics During the 1984 NBA Finals: ‘We Didn’t Know Who Was Watching’ 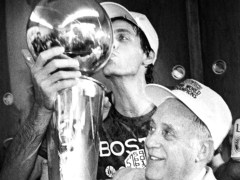 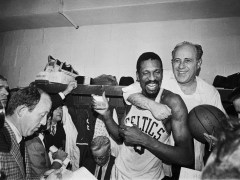 Red Auerbach Knew Beforehand the Celtics Were Beating the Lakers in Game 7 of the 1969 NBA Finals: ‘What They Did Was Make the Biggest Mistake You Could Make in Sports’

During his appearance on the podcast, Worthy talked about his playing days with the Lakers. He spoke about winning the title over the Celtics in 1987 and how it was nice to spoil their chance of becoming the first team to repeat since the Celtics did it in the ’68 and ’69 seasons.

“The Celtics were the last team to win back to back, and it hadn’t been done in like 19 or 20 years. When we won in ’87, we were having a parade, like a pre-media thing.

“Pat Riley stood up there. We were all hungover and ready to go and celebrate, go on vacation — at least take a month. When you win a championship, you just get fat. He stood up there and said, ‘Next year, I’m guaranteeing that we’ll do it again.'”

“I’m like, what the f*** did he just say? That puts an automatic target on your back. But we knew we had to do it. We knew it was a big challenge. He knew exactly what he was doing because he wanted to see was the greatness there or not.

“It motivated us. Guys usually take a month and a half off. We took two weeks off, and we was calling each other, let’s meet at the track. We started running the track — 200, 400 — because we knew it was going to be a track race.”

“He wasn’t running out of motivational speeches, but he was getting close,” Worthy said of Riley.