By the time Wheaties put Richard Petty on its cereal box, The King had already been out of the NASCAR Cup Series for six years. In addition, more than 100 other athletes landed the star treatment, so it wasn’t as big a deal as when Lou Gehrig scored the honor in 1934 and Jesse Owens in 1936.

The faces on the fronts or backs of boxes have changed more than 500 times since. Still, the cereal remained pretty much the same whether it was Petty, Dale Earnhardt, Bill Elliott, or Kyle Busch being recognized.

Among so many legends across a wide swath of sports in multiple sports, Petty was so cool that executives of another brand changed their cereal for him.

The folks at Wikipedia have kept track of individuals and teams that Wheaties has honored by placing them on its cereal boxes. The marketing approach began with Lou Gehrig in 1934 and remained largely a baseball thing through the 1960s.

NASCAR began in 1949 and certainly produced its share of stars, but none made it onto a Wheaties box until Dale Earnhardt in 1996. Richard Petty followed two years later, and then Bill Elliott landed the honor three straight years beginning in 1999.

A handful of others subsequently made it onto the list, including Lee Petty as part of a “Legends of Racing” series.

Cheerios went all out for Richard Petty in 2003

Cheerios is every bit as iconic in the breakfast food world as Richard Petty is in NASCAR and as competitive with Wheaties as Petty was with the Cup Series’ best. Thus, the collaboration in 2003 between the driver and General Mills was a natural.

Rather than the traditional cereal, however, General Mills’ Richard Petty 43’s was a brown sugar-sweetened rice and corn treat shaped in 4s and 3s to commemorate one of the most iconic numbers in sports. With an eye toward boosting sales, the manufacturer developed two box designs: a ‘70s-era picture of Petty along with his famous 1970 Plymouth Superbird and an ‘80s-era Petty with his 1984 Pontiac Grand Prix.

The fact that Petty retired in 1992 was immaterial. He was (and still is) such a beloved and recognizable figure in racing that General Mills knew boxes would fly off the shelves in big NASCAR markets.

“Richard Petty has given so much to race fans and their communities through the years that it seemed only fitting that Cheerios, primary sponsor of the No. 43, honor him with his own cereal,” Laurie Greeno, VP of Motorsports at General Mills, told Motortrend at the time.

General Mills and Petty Enterprises were a team 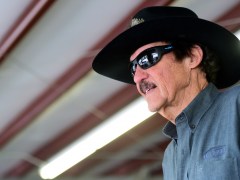 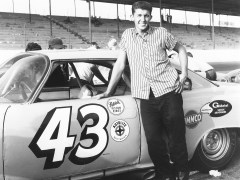 The Ultimate Richard Petty Memorabilia Is Listing for $750,000 on eBay, NASCAR fans 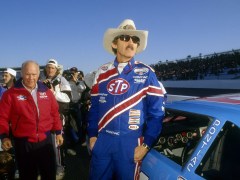 Richard Petty Nearly Didn’t Qualify for His Final NASCAR Race at Atlanta Motor Speedway, Where He Literally Crashed and Burned Before a Miraculous Return

Lee Petty built the legendary NASCAR family’s racing empire, and Richard Petty drove the No. 43 car for years under the STP brand. When STP exited as the car’s primary sponsor, General Mills stepped in to sponsor John Andretti in the famous car beginning in 2000.

The Petty-General Mills relationship ended when the sponsor moved to Richard Childress Racing in 2009. The decision precipitated the departure of Bobby Labonte from the Petty garage. The developments ultimately led to Medallion Financial Group taking a stake in what became Richard Petty Motorsports.

The Petty organization was already struggling to keep up with the Cup Series’ major teams by then, and the decline continued. Prospects improved beginning a year ago as Maury Gallagher bought out Medallion and took a controlling interest.

Through it all, Petty’s driving record remains unmatched, beginning with being tied at seven series championships with Dale Earnhardt and Jimmie Johnson. Petty’s 200 Cup Series victories, seven Daytona 500 victories, and 1,185 starts stand up as records.