This past Sunday, all Kevin O’Connell’s crew had to do was beat the Detroit Lions to clinch their first division title in five years. And one would think a 425-yard day from Kirk Cousins and a record-setting performance from Justin Jefferson would’ve yielded such a result.

But the Lions kept themselves in the race for a spot in the NFL Playoffs with a dominant 34-23 victory behind a strong performance from Jared Goff, who threw for 330 yards and three touchdowns.

Nevertheless, the Vikings are still 10-3 and hold a four-game lead over Detroit with four games to go. So perhaps the third time will be a charm in Week 15?

Vikings playoff chances: What needs to happen in Week 15 for the Vikings to win the NFC North? 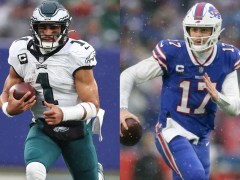 The Vikings’ path to the playoffs in Week 15 is a straightforward one, as all they need to do to win the NFC North is defeat the Indianapolis Colts on Saturday.

While that may seem like an easy task to most, given the Colts’ 4-8-1 record, this might not be the cakewalk Minnesota fans are hoping for. Despite putting up big numbers from time to time, the Vikings’ offense isn’t quite as explosive as people think, as it ranks just 19th in the NFL in yards per play.

And over their last three games, the Colts have allowed just 5.9 yards per pass, which ranks in the top 10 in the league during that stretch. So if Indy can somehow contain Justin Jefferson — certainly easier said than done — they could make this game competitive, much as they did against the Philadelphia Eagles and for the first three quarters against the Dallas Cowboys.

But even if the Vikings lose, they can still clinch the NFC North if the Lions lose on the road to the New York Jets. A tie for either team also seals the deal for Minnesota.

Have thoughts on this topic? Keep the conversation rolling in our comments section below.