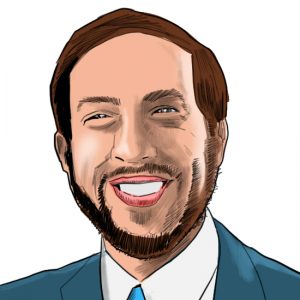 Joe Kozlowski began his career as a sports journalist in 2013, and joined Sportscasting in 2019. He has covered the NBA and NFL for Sportscasting, with specialties in team franchises like the Kansas City Chiefs and legacy NBA players including Michael Jordan. Off the clock, he’s an Arsenal supporter and a hockey goalie.

Joe is inspired by the stories of the athletes beyond the box scores and how they push the envelope — both in terms of what we think a human is capable of accomplishing, and how they find new competitive tactics to win on the court, field, or wherever they call home. He’s also inspired by the work of other sports journalists in the field, including Alex Prewitt, Katie Baker, and Drew Magary. Find more of Joe’s work on Muck Rack.

Kyrie Irving Finally Owns Up to a Major Mistake, but He Needs to Practice What He Preaches

LeBron James Dishes on His Dream 2-on-2 Partner, Playing With Bronny, and More in an Impromptu Twitter Q&A

Why Do the Milwaukee Bucks Have an ‘M’ Patch on Their Jerseys?

Charles Barkley Believes Michael Jordan Is the GOAT for 2 Reasons, and They Have Nothing to Do With His On-Court Resume

Philadelphia 76ers: James Harden Proved Why He’s Not the Answer With a Single Play Against the Heat

2022 NFL Schedule: When Does Your Favorite NFL Team Have a Bye Week?

Joel Embiid Used Michael Jordan Highlights to Take His Game to the Next Level, and It’s Paying Off

What’s the Difference Between a Technical Foul, a Flagrant 1, and a Flagrant 2?

Why Is Philadelphia 76ers Star Joel Embiid Wearing a Mask?

Duke Basketball: Jon Scheyer’s Emotional Endorsement From Chris Carrawell Should Have Everyone Trusting the Process

Stephen A. Smith Perfectly Exposes the Hypocrisy of Kyrie Irving Calling Himself a Martyr

Philadelphia 76ers: Why Isn’t Joel Embiid Playing and When Will He Return From Injury?