It’s a game New York Giants fans would like to forget. It was one of the most bizarre plays in NFL history that happened 45 years ago and always pops up when the Giants face the Philadelphia Eagles.

Well, the Giants and Eagles square off Saturday night in a key playoff meeting that sends the winner into the NFC Championship Game. The hyped-up matchup triggers memories of the rivalry. The biggest flashback is from Nov. 19, 1978, when Giants quarterback Joe Pisarcik couldn’t execute a simple handoff. The Eagles capitalized and pulled off a stunner.

It’s been known as the original “Miracle at the Meadowlands,” and it never should’ve happened. It’s also the game that eventually started the trend of quarterbacks taking a knee in the final seconds.

Through 11 games that season, the Giants and Eagles still had playoff hopes, although neither team was lighting it up. The Eagles entered the game at 6-5, while the Giants were 5-6. It was the first year of the NFL’s 16-game schedule, so both teams still had postseason aspirations.

The Giants appeared to be on their way to a victory when they had the ball with 31 seconds left. They held a 17-12 lead, and the Eagles had no timeouts left. All that was left for the Giants to do was take a knee, but that concept hadn’t officially been born yet. The NFL put in a rule that quarterbacks could simply kneel down in “victory formation” to end the play in 1987, but after the Pisarcik miscue, quarterbacks and coaches became more protective of the ball in those situations.

Instead of using the traditional quarterback sneak to end the game, Pisarcik tried to hand the ball to fullback Larry Csonka, but the ball was fumbled on the exchange. Eagles defensive back Herm Edwards scooped up the ball and returned it 26 yards for the game-winning touchdown. The Eagles won 19-17.

“I never had control,” said Pisarcik after the game, per The New York Times.

The improbable victory helped the Eagles make the playoffs 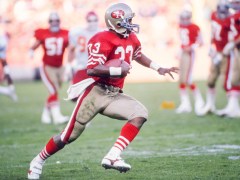 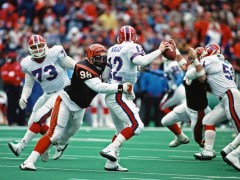 The Giants led 14-0 after the first quarter on the strength of two Pisarcik touchdown passes, one to Bobby Hammond and the other to Johnny Perkins. They led 17-6 after three quarters. The Eagles cut the deficit to 17-12 and had a shot to take the lead, but quarterback Ron Jaworski was intercepted with 1:23 remaining, seemingly giving the Giants the victory.

Back then, if quarterbacks didn’t use a sneak to kill the clock, they would drop back and fall to the ground. They still had to be touched by a defender. On the play before the fumble, Eagles linebacker Frank LeMaster charged at running back Willie Spencer, shoving him into Pisarcik. Players on both sides got heated after the play.

On the next play, Giants offensive coordinator Bob Gibson called for a run, and Pisarcik handed off to Csonka, who ran for 12 yards to set up third-and-1. Gibson called for yet another run, and according to Sports Illustrated, Csonka questioned the call, but Pisarcik wouldn’t change it. Pisarcik had been in the doghouse the previous week for changing a play.

Instead, the handoff was not clean, the ball bounced off the turf and into Edwards’ hands. He ran in for the score. The Eagles eventually finished the season 9-7 and made the playoffs with the help of that victory.

The Giants, however, were shocked. Gibson was fired the following day, and linebacker Harry Carson admitted he struggled to get himself together after the loss.

“I was stunned,” he told SI. “All we had to do was run out the clock. And the thing that I remember was that I was so stunned that I could not get up from the bench when the game was over. Players walk off the field, walk across the field to congratulate the other team. I was stuck in my seat and could not move.”