The bad blood between the Boston Celtics and the Detroit Pistons began in 1985. Before then, the Pistons were irrelevant in the NBA playoff picture. As the ’80s wore on, the Pistons became a problem for the Celtics, eventually dethroning them as kings of the Eastern Conference in 1988.

During the 1985 Eastern Conference Semifinals, things got a little chippy between the teams. Pistons center Bill Laimbeer was up to his old antics, throwing elbows and playing dirty. Celtics center Robert Parish offered a guarantee after Game 3 of that series that didn’t come true until two years later.

Robert Parish, Larry Bird, and the Boston Celtics were no fans of Bill Laimbeer and the Detroit Pistons

The Celtics of the ’80s were far and away a more talented group than the Pistons. With Larry Bird, Kevin McHale, Parish, and Dennis Johnson leading the way, Boston was the team to beat throughout the decade.

The Pistons came into the playoff picture in 1985 with a young Isiah Thomas and the veteran Laimbeer leading the way. As we moved deeper into the decade, they added Joe Dumars, Dennis Rodman, John Salley, and Rick Mahorn, forming the “Bad Boys.”

In 1985, the Celtics and Pistons squared off in the conference semifinals. Boston won the first two games comfortably. Detroit then won the next two at home. In Game 5, Bird and Johnson combined for 73 points in a 130-123 victory. The Celtics then closed out the series in Detroit, with Parish leading the way with 24 points and 13 rebounds.

It was in Game 3, however, that the Celtics became irked with Laimbeer’s antics. He threw an elbow or two at Parish and drew the attention of the Celtics.

“Laimbeer threw an elbow,” Boston coach K.C. Jones said after the game, per United Press International. “A lot of times, the officials don’t see it. Laimbeer does whatever he can get away with. And he does it all the time.”

“Bill Laimbeer is going to flop around like a fish out of water every time he gets a chance,” Bird said. “It’s just the way he plays. He flops around out there. The rest of the guys play basketball. The referees watched him play 82 times this year. They still let him get all the calls.”

Parish made a guarantee after Game 3, but it didn’t come true until 1987 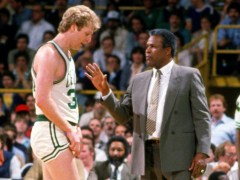 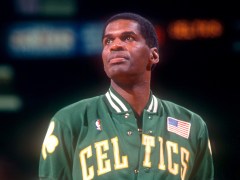 Laimbeer’s elbows to Parish were subtle. Parish sent a much harder one back in the third quarter of Game 3. Laimbeer began to go after Parish but thought better of it.

“If I had taken a swing at him,” said Laimbeer, “I would have been gone from the game. That wouldn’t have done us any good.”

Parish made a guarantee after the game.

“I feel he took some cheap shots at me,” Parish said. “I guarantee something will break out if they let it go (in Game 4).”

Parish was right — sort of.

While things didn’t break out between the two centers for the rest of the series, it happened the next time the two met in the playoffs. That came during the Eastern Conference Finals in 1987.

Laimbeer was up to his old tricks in Game 3 in the ’87 conference finals when he sent Bird to the floor with a hard foul that led to ejections for both players. Bird was tossed after he threw the ball at Laimbeer while referees were trying to restore order.

Parish, a mild-mannered center, finally got fed up with Laimbeer in Game 5. While they were both inside the paint going for a rebound, Parish pummeled Laimbeer, punching him from behind multiple times as Laimbeer went to the ground. No foul was called. Parish later admitted he couldn’t believe what he had done.

“In the heat of the battle, it was the first time I had lost control of my emotions and my temper,” Parish told former teammate Cedric Maxwell during an interview on the Cedric Maxwell Podcast. “We had exchanged a few unpleasantries toward one another and a few elbows. I couldn’t believe I lost my composure like that. That’s the first time ever.”

The Celtics wound up winning the game when Bird famously stole an inbounds pass from Thomas and flipped the ball to Johnson for the game-winning layup. The NBA suspended Parish for Game 6, and the Celtics defeated the Pistons in seven games.