The memory will last a lifetime for NASCAR fans, but the evidence of what Ross Chastain did at the end of the Martinsville Cup Series playoff race will go away early this spring. For now, however, the track continues to give those fans who marveled at his bravado one more look at the evidence.

When the white flag came out at Martinsville Speedway on Oct. 30, 2022, Ross Chastain needed to make up at least two positions if he was going to advance to the NASCAR Cup Series Championship 4 the following week in Phoenix. That was compelling in itself, but Christopher Bell fighting off Kyle Larson and Ryan Blaney seemed to be the bigger story at the moment because he was too far down in points and needed to win to advance.

Bell, who had taken the lead from Chase Briscoe on Lap 496 of the Xfinity 500, closed the deal. But what was happening behind him on that last lap was nearly beyond description. Chastain moved the No. 1 Chevy up to the wall, stopped the gas, and bulldozed his way through the third and fourth turns, passing multiple cars to his left and tapping the back of Brad Keselowski’s No. 6 Ford at the finish line.

Chastain only finished fifth – adjusted to fourth after officials disqualified Keselowski – and one spot ahead of Denny Hamlin. However, the multiple passes he pulled off in the final 300 yards put him six points clear of the No. 11 Toyota and into the Championship 4.

Ross Chastain made a lasting impression at Martinsville 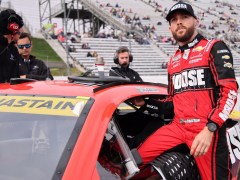 Copycatting Ross Chastain’s Martinsville Move Was an Option For Drivers in All 3 Championship 4 Races in Phoenix, Including Chastain Himself 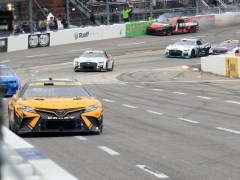 Ross Chastain’s final lap that day at Martinsville was faster than the track’s qualifying record. Not surprisingly, the right side of his Trackhouse Racing Chevy was trashed. So, too, was the outside wall that Chastain scuffed up with his rarely attempted and rarely successful maneuver.

The car went back to the Trackhouse Racing shop in North Carolina for repairs, but Martinsville Speedway president Clay Campbell had other ideas regarding the wall. Various logos will have to be added to the barrier in the spring anyway, so Campbell was in no hurry to slap fresh paint on it before the winter chill set in.

He told the maintenance crews to leave the “stripe” that Chastain painted through Turns 3 and 4 in place for now. There’ll be time to spruce it up in the spring before all three NASCAR national series return April 14-16.

“We’ve got so many people stopping by here, taking pictures,” he told the Martinsville Bulletin. “It’s an historical moment, and we’re going to do our best to preserve it all that we can.

“It was one move that got so much exposure, not only for Martinsville Speedway, but for the sport. … That move will go down in history and it will be there forever.”