The NFL playoffs have a little bit of a different look to them this year. While the Los Angeles Chargers and Jacksonville Jaguars square off in a meeting of two teams that haven’t tasted the playoffs in a few years, the new look has to do more with a pair of teams that aren’t participating.

For the second time in three years, the New England Patriots haven’t reached the postseason. After earning the NFC’s top seed the last two seasons, the Green Bay Packers are absent from the playoffs as well. How long has it been since both the Patriots and Packers were out of the playoff picture in the same season?

Both the Patriots and Packers had their chance. On Sunday, each team controlled its playoff destiny. Win in Week 18, and they’d be playoff-bound.

The Patriots had the tougher task as they played their regular-season finale at the Buffalo Bills. New England hug with the Bills, who pulled away in the second half for a 35-23 victory. The Packers, however, had to beat the Detroit Lions at home. Detroit was eliminated from playoff contention earlier in the day and had nothing but pride to play for.

That pride was enough as the Lions left Lambeau Field with a 20-16 victory over a Packers team that was overcome by poor play and foolish penalties.

The last time the Patriots and Packers both failed to make the playoffs in the same season was in 2008. Patriots fans cringe when reflecting on that ’08 season because that’s when they saw quarterback Tom Brady go down with a season-ending ACL injury in the season opener against the Kansas City Chiefs.

Matt Cassel replaced Brady as the starter, filling in admirably. The Patriots finished the season 11-5, but the Miami Dolphins won the division via tiebreaker. Six teams in the conference had 11 or more wins, and the Patriots were the odd team out. The Chargers made the playoffs by winning the AFC West with an 8-8 record.

The Packers finished in third place in the NFC North with a 6-10 record. It was Aaron Rodgers’ first season as the full-time starter in Green Bay.

As the playoffs begin, the Patriots and Packers have a lot of questions to answer 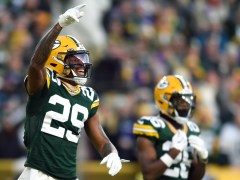 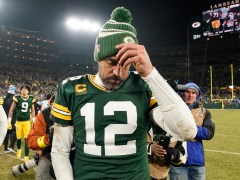 Aaron Rodgers Asks a Familiar Question, but This Time the Answer Is Clear

Even without the Patriots and Packers, the postseason should be interesting. The Jaguars haven’t been here since 2017 and the Chargers since ’18, but one of them will advance this weekend.

How will rookie quarterback Brock Purdy, who earned the Mr. Irrelevant label for being the last pick in the 2022 NFL Draft, fare for the San Francisco 49ers when he’s on center stage? Can the Philadelphia Eagles hold up their end of the bargain as the No. 1 seed in the NFC? How far will Tom Brady carry the Tampa Bay Buccaneers?

Is Mac Jones the answer at quarterback for the Pats? Will Bill Belichick hire a legitimate offensive coordinator? How about an upgrade at wide receiver?

Who will be the quarterback in Green Bay next year? If Rodgers returns to the Packers, can they afford to upgrade their receivers with Rodgers’ monstrous contract eating up much of their salary cap space? Is Matt LaFleur the right coach?

There are plenty of questions to answer for both teams. They also now have plenty of time to look into them.