NASCAR‘s 2023 Cup Series schedule is already set to feature some notable changes, but let’s not stop there.

After several years of holding steady on the slate of race tracks that make up the calendar, NASCAR has been in expansion mode since 2021, first adding Circuit of The Americas, Nashville Superspeedway, and Road America to the Cup itinerary.

Then, ahead of the 2022 season, the racing organization awarded a Cup date to two more tracks: World Wide Technology Raceway just outside of St. Louis and the famed Los Angeles Memorial Coliseum, which hosted the preseason Busch Light Clash exhibition race.

Next year, two more “new” tracks will join the mix with the addition of a Chicago street course and the return of fabled North Wilkesboro Speedway, which is being renovated to host the NASCAR All-Star Race after being absent from the Cup Series schedule since 1996.

Some of NASCAR’s top executives have hinted that more new venues may be popping up beyond 2023, which begs the question: What will be the next track — or tracks — to become part of the Cup Series tour, possibly as early as 2024?

Let’s take a look at three venues that warrant serious consideration, starting with the one most deserving of a Cup Series date.

No track is as worthy of a spot on the Cup Series calendar as Iowa Speedway, a .875-mile short track in Newton, Iowa, that hosted Xfinity and Truck series races every season from 2009-19 and continues to host the NTT IndyCar Series.

Iowa Speedway, which is owned by NASCAR and was designed by NASCAR Hall of Famer and 1989 Cup Series champion Rusty Wallace, is located smack dab in the middle of America’s Heartland, in an area one would expect to appeal, in particular, to NASCAR’s more traditional fan base.

The track produced some pretty memorable moments over the 11 years that Xfinity and Truck series drivers competed there, with one of the best being Austin Dillon’s first career Truck Series win. That came in 2010 and was the first NASCAR victory of any kind by a driver sporting the No. 3 since Dale Earnhardt’s death on the final lap of the 2001 Daytona 500.

Another driver who carries a strong affinity for Iowa is Brad Keselowski, who captured three Xfinity Series victories at the track, including the inaugural event at Iowa for NASCAR’s No. 2 division.

“Iowa is just a special place for me,” Keselowski said in a televised Victory Lane interview after prevailing at Iowa for the final time in 2014. “(I won) the inaugural (Xfinity Series) race here, and I really enjoy coming out here to the Midwest. I’m from Michigan, which isn’t very close to Iowa, but it’s still the Midwest, and the fans here and the support here are really unrivaled by any other (Xfinity Series) race. It’s a sight to see.”

Unlike Iowa Speedway, which could probably be whipped into Cup Series race-hosting shape fairly quickly since NASCAR competed there as recently as 2019, iconic Rockingham Speedway in North Carolina needs some work — much like what’s taking place to get North Wilkesboro ready in time for the May 2023 All-Star Race.

It’s not a viable option for the 2023 Cup Series Schedule, but that doesn’t rule out future years.

Rockingham is cut out of the same cloth as North Wilkesboro in that it holds a special place in the heart of many NASCAR drivers and fans. It’s been a staple of the Cup Series schedule from 1965-2004 and has hosted some of the most incredible moments in NASCAR history, including that unforgettable Sunday in fall 1994 when Dale Earnhardt won the race and clinched his record-tying seventh Cup Series championship in the process.

Along with its rich tradition, Rockingham is beloved for its roughly 90-minute proximity to Charlotte —  the hub of NASCAR.

Since hosting its final Cup race in February 2004, Rockingham — or “The Rock,” as it was nicknamed long ago — has sat mostly silent, aside from a brief visit by the NASCAR Camping World Truck Series in 2012 and 2013.

Former racer Andy Hillenburg, who bought the track at an auction in 2007 and was responsible for Rockingham’s all-too-brief resurrection, gave up the ownership reins in 2016 when the facility went into foreclosure. Whether Rockingham will ever rejoin the Cup tour remains to be seen, but no track no longer on the Cup schedule has more history than the 1.017-mile oval in Richmond County, North Carolina.

Based on some recent developments and planned upgrades for The Rock, a return to the Cup Series schedule doesn’t appear to be out of the question.

Including South Boston on a shortlist of tracks that should be in the running for a Cup Series date may seem a bit farfetched, but consider this: South Boston — a tiny, rural town tucked away in Halifax County, Virginia — is no further off the proverbial beaten path than North Wilkesboro.

However, unlike North Wilkesboro, which has sat mostly idle for the past 26 years, South Boston has been very much alive and in business, hosting races in connection with the NASCAR Advance Auto Parts Weekly Series — the sport’s popular grassroots league that competes at short tracks throughout the United States on Friday and Saturday nights from early spring through late fall. 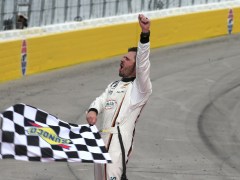 In fact, of all the tracks in the country that predominantly host Weekly Series events, South Boston might be the most famous. Brothers Jeff and Ward Burton, who both enjoyed successful Cup Series careers, hail from the South Boston area and cut their teeth racing at the .4-mile short track that opened in 1957.

Others who’ve competed and won here in the decades since include legends of the sport such as Richard Petty, Junior Johnson, Bobby Isaac, and Benny Parsons, who all prevailed at South Boston when the track hosted NASCAR’s premier division 10 times between 1960 and 1971. Although it’s been over five decades since the Cup Series last came to South Boston, the Xfinity Series convened there almost every year from 1982-2000, with the likes of Dale Earnhardt Jr., Jeff Burton, Jack Ingram, Sam Ard, and Tommy Ellis all going to Victory Lane at one time or another.

Given the popularity Martinsville Speedway — a Cup Series short track located just over 30 minutes from South Boston — has enjoyed for over 75 years, it stands to reason that South Boston would be an equally attractive venue for a Cup event at some point in the foreseeable future.