When co-founder Tony Stewart rolled out the Superstar Racing Experience (SRX) in 2020, it immediately revived memories of the old IROC series because of a format bringing together drivers from NASCAR, IndyCar, and more.

When SRX returns this summer, longtime racing fans will be celebrating the revival of Thursday Night Thunder and small local tracks. And just like so many other decisions by Stewart over the years, there will be supporters and detractors.

ESPN said Monday it signed a multi-year agreement to broadcast the six-race SRX beginning next summer in the new iteration of Thursday Night Thunder, a staple of the network’s coverage that started in the 1980s and emphasized grassroots racing. That understandably sits well with NASCAR Hall of Famer Tony Stewart, a big fan of the small tracks.

“Thursday Night Thunder is where guys like me, who were just starting our careers in USAC, got the chance to make a name for ourselves because of its presence on ESPN,” Stewart said in the network’s announcement. “It’s great to see Thursday Night Thunder return, but to also be a part of it all over again with SRX.”

The 2023 drivers will be revealed at a later date.

SRX is moving to Thursday nights

In the most significant new twist to the Superstar Racing Experience, ESPN is moving the races from Saturday nights to Thursdays at 9 p.m. ET. The six consecutive weekly telecasts run July 13 through Aug. 17.

The list of tracks to be used has not been announced yet, but it’s a good guess most will be in the Central time zone to make it more fan-friendly for those watching in person. However, the later start on a weeknight will undoubtedly draw criticism from fans who’ve grown used to watching on TV the past two years.

On the other hand, Tony Stewart has probably made a lot of new fans by moving off of Saturdays, when hardcore fans prefer to attend live local racing at dozens of small tracks around the country. Even better, moving to Thursdays creates the opportunity for Stewart to recruit more NASCAR drivers for one-off appearances. Given his frustration with NASCAR executives. Stewart would relish that.

Is ESPN sending a message to NASCAR? 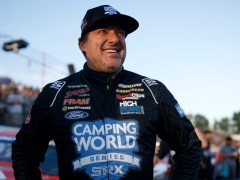 ESPN parent company Disney recently signed a contract extension with Formula 1, and the cable company has had the NASCAR broadcast contract in the past. SRX falls somewhere between those two and the Thursday Night Thunder content of the past. ESPN executives undoubtedly see it as quality entertainment at a low price.

“SRX has been an impressive property in its first two seasons and has produced competitive and exciting action,” said Burke Magnus, president of ESPN programming and original content. “We look forward to bringing live racing back to summertime Thursday nights on ESPN with SRX.”

How does ESPN feel about Sunday afternoon racing from February to June or June to November? NASCAR’s contracts run through 2024, but negotiations with Fox and NBC will begin next year. The sport’s executives would welcome additional bidders to drive up the rights fee.

Meanwhile, ESPN gets a first summer of Tony Stewart’s SRX to get a feel for whether it wants to pursue more live racing to beef up programming on its multiple cable channels and its streaming service.