We may be five weeks out from the Busch Light Clash that kicks off the 2023 NASCAR Cup Series schedule, but Clint Bowyer is already in midseason form. The driver-turned-analyst made his return to the Fox Sports airwaves on New Year’s Day.

Bowyer wasn’t bashful about sharing his opinions, most notably by pointing to someone other than Joey Logano as the best driver in the sport. In fact, he doesn’t even have the defending series champion in his top two.

Clint Bowyer is back on the air following a fatal accident

Clint Bowyer was days away from helping Fox Sports wrap up its portion of the 2022 NASCAR Cup Series broadcast schedule when he missed the Toyota/Save Mart 350 on the Sonoma road course in June. There was no explanation from the network beyond saying Bowyer was dealing with a personal matter.

The details emerged a few days later when a local television station reported Lake Ozark, Missouri, police had completed their investigation into the death of a 47-year-old female pedestrian struck by a car driven by Bowyer.

Bowyer was driving home on U.S. Route 54 following Fox’s coverage of the Enjoy Illinois 300 at World Wide Technology Raceway outside St. Louis when he struck a woman. She was pronounced dead at the scene.

The police report said Bowyer showed no indication of impairment and provided a sample that did not show alcohol in his system.

Fox Sports teased the start of the upcoming NASCAR Cup schedule with an hour-long special on New Year’s Day. The panel of analysts included Clint Bowyer, Jamie McMurray, and Larry McReynolds. They reviewed the offseason personnel changes, made a few predictions, and served up recorded interviews with a handful of drivers and executives.

One of the topics was Hendrick Motorsports, which McReynolds noted roared out of the gate with five wins in the first 11 races of the Next Gen car’s debut season. HMS finished the season with 11 victories, just one more than Kyle Larson posted by himself in 2021. Chase Elliott led the way with five wins, followed by Kyle Larson (three), William Byron (two), and Alex Bowman (one).

“I don’t want to take anything away from the other two, but the first two are both champions and in my opinion the best drivers in this sport, Kyle Larson and Chase Elliott. As long as you have those two bullets behind the chamber, I’m telling you you’re going to be dangerous. I think Hendrick Motorsports is just fine.”

McMurray made the point Larson vs. Elliott is nothing like Ford vs. Chevy.

“When you’re in the same organization, you have the exact same cars,” he said. “That’s when it’s like the jeff Gordon-Jimmy Johnson rivalry.”

It’s good on paper but may prove dangerous 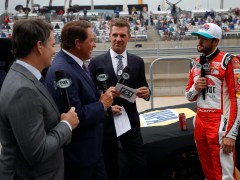 Clint Bowyer Takes Swipe at Hendrick Motorsports Drivers, Mocking Them for Not Being Tough

Twice last year, Larson made moves taking Elliott out of contention for race victories. He wandered up the track to put the No. 9 Chevy into the wall late at Fontana and later forced his teammate wide on the final restart at Watkins Glen.

“I believe the toughest rivalry that we have in our sport is right in between those walls at Hendrick Motorsports,” Clint Bowyer said.

It means owner Rick Hendrick and top lieutenant Jeff Gordon could have their hands full reminding the pair they work for the same team.

“They both can’t be the No. 1 guy, and that’s a dangerous thing,” Bowyer said. “But I think both of them are certainly capable.”