Kurt Warner might be the NFL’s biggest feel-good story of all time. He’s probably the biggest rags-to-riches story as well.

The former St. Louis Rams, Arizona Cardinals, and New York Giants quarterback became an instant hit during his first year as a starter in the NFL. He led the league in touchdown passes, earned the MVP, and guided his team to a berth in the Super Bowl years after getting cut by the Green Bay Packers. Warner’s rise to the top is astonishing, but is he the best undrafted NFL player of all time?

After playing his college football at Northern Iowa, Warner went undrafted. The Packers signed him as an undrafted free agent, but with Brett Favre, Mark Brunell, and Heisman winner Ty Detmer on the roster, Green Bay released Warner before the regular season.

He played with the Iowa Barnstormers of the Arena League and the Amsterdam Admirals of NFL Europe before getting a chance with the Rams in 1988. Warner, however, is far from the only undrafted player who went on to have NFL success.

Pro Football Hall of Famer Warren Moon is another NFL star who wasn’t drafted. At best, he would have been a late pick after playing collegiately at Washington, so he signed with the Canadian Football League, where he won five Grey Cups in six seasons.

Moon put up some big numbers early when he signed with the Houston Oilers of the NFL, but he went 12-33 as a starter in his first three seasons. He maintained the big numbers, leading the league in passing yardage in 1990 and 1991, and put together eight straight winning seasons from 1987-1994.

Antonio Gates, one of five NFL tight ends with 10,000-plus receiving yards in a career, is another undrafted star, as are former Dallas Cowboys quarterback Tony Romo and kicker Adam Vinatieri.

Warner is the best player to go undrafted in the NFL 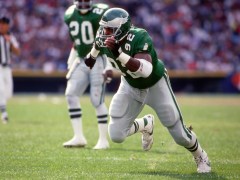 Is Reggie White the Best Defensive Lineman in Both Philadelphia Eagles and Green Bay Packers History? 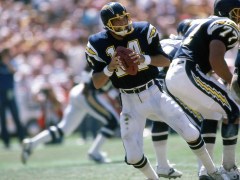 While Warner has all the storylines that led up to his NFL success, he also had the talent. Nobody expected what would happen when he filled in for an injured Trent Green during the 1999 season.

After throwing just 11 passes in 1998, the Rams called on Warner when Green suffered a season-ending knee injury in the preseason of 1999. Warner answered that call like a 10-year veteran.

With the help of running back Mashall Faulk and a talented receiving corps that included Torry Holt and Isaac Bruce, the Rams had one of the most explosive offenses in the NFL. Warner’s pinpoint accuracy highlighted an unstoppable passing game that helped the Rams to a 13-3 record. Warner led the NFL in completion percentage (65.1%) and touchdown passes (41) as the Rams defeated the Tennessee Titans in Super Bowl 34.

In his first year as the starter, Warner was named the NFL’s MVP, an award he’d reclaim two years later when the Rams returned to the Super Bowl, where they were upset by the New England Patriots. He played six years with the Rams before playing one uneventful season with the New York Giants. Warner ended his career with the Arizona Cardinals, getting them to the Super Bowl in the 2008 season.

Warner was inducted into the Pro Football Hall of Fame in 2017.