On paper, Joey Logano did not have the best season by a NASCAR driver. Luckily for the driver of the No. 22 Ford, the season was conducted on ovals and road courses rather than paper, and he earned his second Cup Series championship.

Logano didn’t lead in victories. Nor did he top the field when it came to top-10 finishes. But he squirreled away playoff points throughout the season and then won the Championship 4, the race that matters most. As such, he deserved the title and the spoils that go with it.

Nevertheless, a deep examination confirms someone else had the better season.

I’m a numbers guy, but a careful one because I’ve heard the tale of the guy who drowned in a river whose average depth was three feet. I also know there are lazy people who use statistics like a drunk uses a light pole: for support rather than illumination.

That being said, data used properly can enlighten, even dispelling notions we mistook for truths. In this instance, NBC racing analyst Diandra Leslie-Pelecky – a/k/a Dr. Diandra – went digging and confirmed what a lot of us knew: Chase Elliott may have finished 28th in the Championship 4 at Phoenix, leaving him fourth in the season standings, but his body of work was better than that of anyone else in the 2022 Cup Series.

She came to her conclusion by focusing on data proven over time to correlate to success. NASCAR doesn’t crown its best drivers based strictly on wins, and neither does Leslie-Pelecky.

Wins have never been the determining factor in crowning champions

One need only go back to NASCAR’s second season to understand that race wins do not determine the season champion. Curtis Turner won four times in 1950 but finished fifth in the points standings because Bill Rexford ran in the top 10 with more consistency.

Much more recently, there was Matt Kenseth’s 2003 season and the impetus for NASCAR adopting a playoff format the following year. Kenseth won his title with just a single race victory to his credit. Ryan Newman won eight times and led three times as many laps. But he also posted seven DNFs to Kenseth’s two.

That’s why Diandra Leslie-Pelecky’s analysis doesn’t lean heavily on wins – or any other single statistic. So, Chase Elliott’s five victories in 2022 to four for Joey Logano mattered, but only somewhat.

Chase Elliott finished ahead of Joey Logano in all seven categories 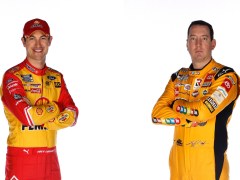 Diandra Leslie-Pelecky, who researches numerous topics throughout the NASCAR Cup Series season to uncover trends and make sense of the megabytes of data, focused on seven key indicators of success to identify 2022’s top driver:

Chase Elliott topped everyone in five of the seven categories – Ross Chastain paced the field in top-five and top-10 finishes – and bettered Joey Logano in all seven.

So, how did Logano win his second Cup Series championship? All four drivers in the Championship 4 (Chastain and Christopher Bell were the others) showed up near the top in most of the metrics. However, Logano positioned himself nicely for the playoffs and then scored two crucial wins.

His two regular-season victories and seven stage wins built a nest egg of playoff points, and then Logano won the Las Vegas playoff race to open the semifinal round and guarantee himself a place in the Championship 4 regardless of what happened at Homestead-Miami and Martinsville.

That more than trumped Elliott’s early consistency, which included five straight top-two results in midseason. When the playoffs rolled around, Logano mustered five top-10 finishes to Elliott’s three, including the win that mattered most at Phoenix.