By all accounts, the 2022 NASCAR Cup Series season was a disappointing one for Martin Truex Jr.

Not only did the veteran driver and 2017 Cup Series champion fail to win a race or make the playoffs for the first time since 2014, but his results in other areas — top-five finishes, top-10s, and laps led — were wide of the mark to which he’s been accustomed to hitting in recent years.

While some of Truex’s difficulties can be attributed to plain ol’ rotten luck, other woes were, on many occasions, nothing more than a byproduct of poor in-race execution or simply not having enough speed in his No. 19 Joe Gibbs Racing Toyota.

And this, of course, begs the question: What can Truex do to return to his traditional frontrunning ways in 2023, a year that could be his final one in NASCAR’s premier series?

Although Truex’s struggles in 2022 were undoubtedly not due to any one factor, one person is ultimately in charge of ensuring the cars are fast, the parts don’t break, and the pit stops and pit strategy calls are darn near flawless.

That one person is the crew chief, and it’s time for team owner Joe Gibbs to give Truex a new one for 2023.

James Small initially looked like a good match for Truex

From 2015-19, Martin Truex Jr. was paired with crew chief Cole Pearn — first at the now-extinct Furniture Row Racing and later for one season at Joe Gibbs Racing, which Truex joined in 2019 after Furniture Row shut its doors.

Over the five seasons with Pearn atop his pit box, Truex won a total of 24 races, qualified for the Championship 4 on four occasions, won a title, and finished runner-up in points twice. And in the one season over that stretch that he didn’t make it to the Championship 4, Truex still went to Victory Lane four times, grabbed five poles, and led over 1,800 laps.

Truex and Pearn enjoyed the kind of magic that’s rarely seen in a driver-crew chief combination, and it’s the kind of magic you want to hold onto for as long as you possibly can. But after five glorious seasons calling the shots for Truex, Pearn shocked everyone at the end of 2019 when he abruptly announced he was not only stepping down as Truex’s pit boss but also leaving the sport altogether.

With Truex in need of a new leader for his No. 19 team in 2020, team owner Joe Gibbs promoted James Small — a familiar face — to the crew chief role. Shortly thereafter, Truex’s performance began to decline ever so subtly before eventually nosediving off the proverbial cliff.

At first glance, Small appeared to be a natural fit to replace Pearn. Not only had he spent the past year as Truex’s lead engineer at Joe Gibbs Racing, but prior to that, he had also worked in various roles at Furniture Row Racing, where Truex and Pearn spent their first four seasons together.

During that time, Truex and Pearn both got to know Small quite well, which made the former comfortable with Joe Gibbs’ selection of Small as Pearn’s successor at JGR.

The Martin Truex Jr.-James Small experiment has run its course, and change is needed

In James Small’s first year as Martin Truex Jr.’s crew chief, the driver went to Victory Lane just one time — his lowest win total in five seasons — but managed to finish seventh in points and salvage an all-around decent season.

Then came 2021, when it seemed as though Truex and Small had recaptured some of the old magic with Cole Pearn. Truex won four races, returned to the Championship 4, and finished as the runner-up in points for the third time in his career.

So when 2022 rolled around, the stage looked to be set for Truex to take another step forward and capture his second Cup Series championship and first at Joe Gibbs Racing.

That’s not what happened. Not by a country mile.

By the time all the dust settled, Truex had endured his worst season since the pre-Pearn days, finishing 17th in points.

That’s a rather steep regression that simply can’t be ignored. And the fact Truex slipped so much from Year 2 to Year 3 is a troubling indication that the two may lack the chemistry to be super-successful together.

Three years is also a large enough sample to draw some pretty firm conclusions about how well Small and Truex mesh, and it doesn’t appear to be all that good. 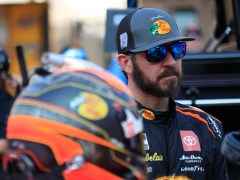 Martin Truex Jr. Calls Out NASCAR in a Way the Sport Cannot Ignore

It’s also worth noting that Truex has been noncommittal about his plans for 2024 after taking half of the 2022 season to decide whether he wanted to retire or race on in 2023. While he ultimately opted to stay put, it’s hard to imagine him giving it yet another go in 2024 if he doesn’t at least score a couple of wins and make a deep playoff run in the season to come.

The best way to ensure that happens? Pairing him with a new crew chief.