The Daytona 500 may be the biggest race of the regular season, but NASCAR continues to make the schedule leading up to it smaller. Calling it Speedweeks is already misleading, though technically accurate. Realistically, we’re down to Speed Days, and it’s getting worse.

The latest news about a tentative schedule leading up to the first points race of 2023 poses problems for some teams, especially those normally on the outside looking in.

There will be no practice before Daytona 500 qualifying

Fox Sports racing reporter Bob Pockrass tweeted the tentative schedule for events leading up to the Daytona 500, which kicks off the NASCAR regular season on Feb. 18, and it’s thinner than the prime rib at a $9.95 buffet.

Continuing a trend that started before the pandemic, NASCAR has again shortened the schedule. The latest change is the scrapping of the two Tuesday Cup Series practice sessions that kicked off Speedweeks last season. That means the cars won’t appear on the track until Wednesday qualifying, which sets the field for Thursday’s Bluegreen Vacations Duels.

Cup teams will get practice time on Friday after qualifying for the ARCA and Craftsman Truck Series races and practice for the Xfinity Series. They’ll kick off Saturday’s schedule with another practice and then return Sunday for the Daytona 500.

Cutting two practices is a double-edged sword. It saves chartered teams from potentially wrecking cars in practice but puts them at risk when they have to race non-chartered teams that might be going to a superspeedway for the first time.

Why will there be so little practice before the Daytona 500?

A year ago, NASCAR Cup Series teams got two practice sessions the day before qualifying and then the single practices on Friday and Saturday. It would seem to make more sense to yank one of the practices between the Duels and the Daytona 500 than to make everyone go into the qualifying without the benefit of laying down some laps.

It’s quite the difference from 15 years ago, when there legitimately were multiple weeks of action during Speedweeks. In the Nextel Cup days, there were Friday and Saturday practices the weekend before the Daytona 500.

Now, calling it Speedweeks is only accurate because the Daytona 500 continues to be held on a Sunday, which is the start of a new week. That’s a little weaselly and the sort of hair-splitting that might get a product manufacturer hauled in by the Bureau of Consumer Protection at the Federal Trade Commission.

Still, we can’t lay all the blame at the feet of NASCAR’s decision-makers. With guaranteed spots in the Daytona 500, owners of chartered cars have little incentive to log practice laps on the ever-dangerous superspeedways. Even with the reduced horsepower package, owners and crew chiefs have a recent history of skipping laps at Daytona and Talladega that don’t count. 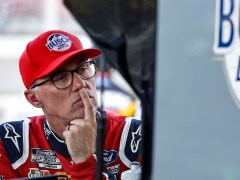 Kevin Harvick Will Be the Most-Watched Driver at Daytona Speedweeks 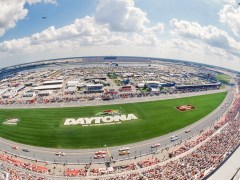 Helio Castroneves is a major name in open-wheel racing, having won the Indianapolis 500 four times. As such, don’t label him “a little guy” if he aligns with Trackhouse Racing to try qualifying for the Daytona 500.

Castroneves driving for Trackhouse would be as formidable as Jimmie Johnson in a Petty GMS car. Meanwhile, Front Row Motorsports is entering truck series champion Zane Smith, and Beard Motorsports is prepping a car for Austin Hill, who made his Cup Series debut at Michigan International last summer.

With the grid limited to 40 cars, that could complete the starting field right there. However, Castroneves could go to Daytona with the less-established The Money Team racing. TMT Racing (with Kaz Grala driving), Team Hezeberg (Jacques Villeneuve), and NY Racing (Greg Biffle) made the Daytona field in 2022 and figure to try again this year.  MBM Motorsports brought two Fords (J.J. Yeley and Timmy Hill) to Daytona last year but failed to qualify, and German start-up 3Friends Racing has made some noise about entering the fray in 2023. Ditto for Chicago-based Team Strange.

That’s a lot of teams with little or no expertise in superspeedway racing. Expecting them to qualify and then compete in the Duels without running any practice laps is a big ask, and just begging for a big mishap. NASCAR should allow the teams that want to run some laps to do exactly that.

And if NASCAR absolutely needed to scrap a practice or two, then they chose poorly.