Despite a strong 2007 season, Kurt Warner wasn’t initially named the Arizona Cardinals‘ starting quarterback for the 2008 campaign as head coach Ken Whisenhunt wanted to give Matt Leinart another shot.

But with a strong training camp and a dismal three-interception performance from Leinart in Arizona’s third preseason game, Warner was handed the reins going into the regular season and held onto them for the entire year, starting all 16 games. And he certainly made Whisenhunt look like a genius for choosing him.

The two-time NFL MVP finished second in the league in passing yards (4,583), behind only Drew Brees, and threw 30 touchdown passes, trailing only Brees and Philip Rivers, each of whom threw 34. More importantly, he helped the Cardinals to a 9-7 record, the team’s first winning season in a decade, and the NFC West title, the franchise’s first division crown since winning the NFC East as the St. Louis Cardinals in 1975.

Warner helped Arizona secure that winning record with a 263-yard, four-touchdown performance in a 34-21 victory over the Seattle Seahawks in Week 17. He was later selected to his fourth Pro Bowl and finished eighth in the NFL MVP voting.

As the No. 4 seed in the NFC, the Cardinals hosted a postseason game for the first since 1947, when the team was still located in Chicago, and took on the fifth-seeded Atlanta Falcons. While Arizona was the higher seed, the 11-5 Falcons were favored. But behind a 271-yard, two-touchdown performance from Warner, the Cardinals took a 30-24 victory.

In the Divisional Round, the Cardinals hit the road for a matchup with the second-seeded Carolina Panthers, who’d won the NFC South with a 12-4 record. Arizona had lost to Carolina in Week 8 of the regular season, 27-23, but the Cardinals breezed to a 33-13 upset win as Warner threw for 220 yards and another pair of touchdowns. 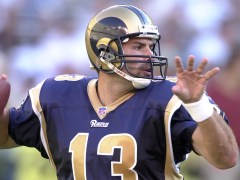 Is Kurt Warner the Best Undrafted NFL Player of All Time?

As the sixth-seeded Philadelphia Eagles had upset the defending Super Bowl champion New York Giants, the Cardinals hosted the NFC Championship Game. And Warner didn’t waste the opportunity, completing three-quarters of his passes for 279 yards with four touchdowns and no interceptions in a 32-25 victory, earning the Cardinals their first-ever trip to the Super Bowl.

By starting Super Bowl 43 against the Pittsburgh Steelers, Warner became just the second quarterback to start the Big Game for two different franchises. And he played well during his third appearance in the title game, completing 72.1% of his passes for 372 yards with three touchdowns and an interception.

Of course, that lone interception proved quite costly as James Harrison returned it 100 yards for a touchdown.

Down 20-7 heading into the fourth quarter, Arizona took a 23-20 lead with 2:37 remaining as Warner and Larry Fitzgerald connected for a 64-yard touchdown. But the Steelers answered as Ben Roethlisberger hit Santonio Holmes on a six-yard touchdown pass with 35 seconds left on the clock to give Pittsburgh a 27-23 lead.

Warner completed two passes for 33 yards on the ensuing drive to get the ball to midfield but fumbled on a hit by Steelers linebacker LaMarr Woodley with five seconds left. Despite the loss, Warner became just the sixth quarterback to throw a touchdown pass in three Super Bowls. And at the time, he held the three highest passing yardage totals in the game’s history.